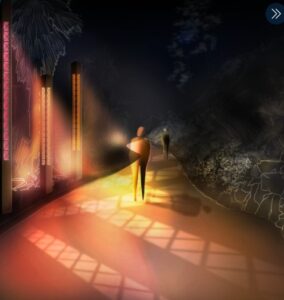 The second phase of work to install LIGHTPLAY at Royal Terrace Gardens in Torquay is set to commence on Tuesday 31 August.

Local contractors Drew & Co are working with award-winning Michael Grubb Studio to complete the installation. Phase 2 includes converting the step lights to new colour choices, installing and commissioning the new bespoke light columns and installing and recommissioning floodlighting. The works are expected to be completed by the end of October.

The creative design for LIGHTPLAY has been directly influenced by the residents of Torbay and Torquay Museum curators supported the design by sharing their collections with the team working on the designs.

This project has been made possible using £200,000 of the £750,000 accelerated funding received as part of the first phase of Torquay’s Town Deal which has enhanced areas of key public realm within Torquay. The installation of creative lighting will encourage more people to connect with the seafront all year round, as well as offering a boost to the night-time economy.

Councillor Swithin Long, Cabinet Member for Economic Regeneration, Tourism and Housing, Torbay Council, said; “LIGHTPLAY, along with the newly unveiled festoon lighting in Princess Gardens and completed works in Upton Park are all part of driving forward a better experience in the town. These innovative and creative projects, enabled by the accelerated funding are creating exciting and interesting focal points within the area, and we look forward to seeing the completed works.”

Vince Flower, Chair of the Town Board, said; “The first phase of the Town Investment Plan is now taking shape, with longer term objectives including additional private and public sector investment, and new jobs. The Town Board is excited to see our ambitious plan to revitalise and regenerate the town move forward.”

Jacob Brandon, Chair of Torbay Culture, said; “LIGHTPLAY is a chance to see something distinctive, and locally inspired, created for Torquay with local talent collaborating with external expertise. The new lighting will reflect and celebrate the fascinating cultural heritage of the place, specifically the natural environment, geology and science which is exactly why we are already recognised by UNESCO as part of the network of global geoparks.”

This is just one of a range of multi-million pound projects coming online for Torbay. These include £21.9m from the government for Torquay Towns Fund, plus £13.35m awarded for the Future High Streets Fund for Paignton. This is in addition to a brand new ‘Torquay Gateway’ train station announced for Edginswell, with £7.8m awarded from Network Rail and Department for Transport for its development. There are also plans to enhance Brixham in line with the Brixham Peninsula Neighbourhood Plan, with key areas earmarked including Harbour regeneration and Brixham Town Centre Car Park redevelopment.