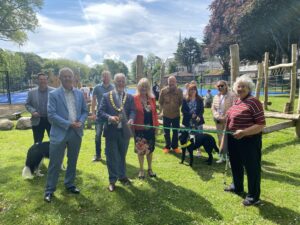 Upton Park in Torquay has been officially opened by Councillor Terry Manning, The Worshipful the Mayor of Torbay following significant investment to improve access and enhance amenities.

On Saturday 26 June, key community stakeholders for Upton came together to celebrate the opening of Upton Park. This follows the completion of enhancement works which were made possible following accelerated funding from the Government’s Towns Fund.
It was announced in October 2020 that Torquay received £21.9 million from the Government’s Towns Fund, with accelerated funding of £750,000 being received to deliver three projects at pace as part of the first phase of the Town Investment Plan. Upton Park, along with Princess Gardens and Royal Terrace Gardens were selected to help revitalise and regenerate the town centre and surrounding areas.

The Masterplan for Upton was originally drawn up in 2014 and updated in 2018 following consultation with the community which enabled a list of priorities to be drawn up. It was expected that the priorities would be delivered over a number of phases as and when funding became available – so having a ‘shovel ready’ scheme to apply the Accelerated Funding was a major boost for the community.
The Council has worked with the community to provide zones to improve the quality of activity that takes place, connect each zone and unify the area for all to enjoy. In total five ‘zones’ have been created ranging from fitness, play and sport to woodland play and netball courts and lawn green bowls, all developed to ensure residents and visitors are able to make the best use of the location.

In addition to the creation of zones, works to trees were undertaken to increase light levels, any trees that were removed were replaced with a replanting scheme to change the species diversity and age structure whilst increasing wildlife potential. The lighting has been upgraded to a LED system, and works have taken place to bring the netball facility back into use.

Councillor Darren Cowell, Deputy Leader of the Council and Cabinet Member for Finance, said; “A Masterplan for Upton Park was updated in 2018 following consultation with the community, this enabled a list of priorities for the area to be drawn up that brought about a variety of social benefits to the community. It’s through this partnership approach with the local community that we have been able to bring the vision of Upton Park to life.”

Councillor Swithin Long, Cabinet Member for Economic Regeneration, Tourism and Housing, Torbay Council, said; “The completion of this project is just one of many happening exciting transformations happening across Torbay. Investments in our parks and open spaces create thriving communities and provides further opportunity for economic regeneration and growth.”

Vince Flower, Chairman of the Town Board, said; “Each project within Torquay’s Town Investment Plan will drive forward a better experience in the town centre and surrounding area, providing a better mix of uses and creating a place where people enjoy spending their time. Upton Park is one of three projects being completed during the first phase of the Town Investment Plan, the Town Board is excited to see its ambitious plan to revitalise and regenerate the town start to take shape. The Town Board would like to thank Margaret Forbes-Hamilton and the Friends of Upton Park for all their help, support and valuable contributions. Margaret in particular has been a consistent champion – even before the accelerated project started and has been a real help in the delivery of the work.”

Margaret Forbes-Hamilton, Secretary for Friends of Upton Park, said; “The Friends of Upton Park applied for and were granted £25,000 of Pocket Parks funding to create a new natural play area for young children. Despite delays caused by the pandemic, the project was completed in October 2020. We expected that it would take several years to obtain funding to carry out more major works, we were thrilled when we heard that a substantial amount of the Accelerated Funding was being allocated to the park. It’s been wonderful to see the increased use of the park by all ages, all enjoying different leisure activities.”

The projects at Upton Park, Princess Gardens and Royal Terrace Gardens are led by TDA and Torbay Council, with the works being delivered by SWISCo.

This is in addition to a brand new ‘Torquay Gateway’ train station announced for the Edginswell area, with £8.7m awarded from Network Rail and Department for Transport for its development. There are also plans to enhance Brixham in line with the Brixham Peninsula Neighbourhood Plan, with key areas earmarked including Harbour regeneration and Brixham Town Centre car park redevelopment.
Find out more about the work we are doing to regenerate our town centres.

Find out more about the work we are doing to regenerate our town centres.